A Message From The Anti-Vivisectionist Book Club

Would you like to know the best way to ruin the aesthetic integrity of a book? It's pretty easy. Just pick your favorite literary obsession- The Lord of the Rings, Finnegan's Wake, The Trial, The Iliad, The New Testament, hell, even the Twilight series- then find a fan group (online or off) and start picking away at the narrative until there's nothing left but bone, break the bone and suck the marrow. Don't spend too much time thinking about the fact that the story (which you claim to love) was alive when you started gnawing away at its flesh.

Now I'm not saying that there's nothing to be found beneath the painted surface of an author's work, and I'm not denying that many writers welcome, even crave, a closer reading of the pages they took so much effort to craft. But a writer also understands (or ought to understand) that the act of creating a story for others often involves ruining much of its beauty within themselves. I can't imagine that any author who truly loves the work they've given life to would wish to see it pulled to pieces upon the altar of fandom, that "deplorable cultus" as Tolkien so aptly put it, and I can't see why some readers can't be satisfied with the pulse and rhythm of a story's heart, that they have to dig it out and eat it, too. 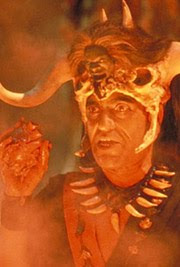 It Must Be In The Genes

As a boy I never had much interest in my family history, partly (mostly) because my parents didn't express any interest in it, and partly because I just assumed there wasn't anything interesting to be found. But it turns out I was wrong.

It seems that my earliest knowable direct ancestor dates from the time of Henry VIII, from Suffolk, England, where he was a member of the minor gentry and where his house still stands. His grandson, a contemporary of Shakespeare, Marlowe, et al., and a citizen (if not a resident) of London, was one of 205 investors in the third voyage of the East India Company. My first direct ancestor in America came over in 1669 and founded a church that I think is still standing. To my knowledge, none of my family fought in the Revolution, but several of them took part in the Civil War and, according to an excruciatingly vague anecdote, one was poisoned by his slaves. Yikes. A mixed bag, to be sure, but hardly boring. It amazes me to think that I'm one of these people.

And I know without a doubt that they're a part of me. See, sometime before 1665 members of my family began using a Coat of Arms: two greyhounds, standing on their hind legs and fighting, in various forms. The thing is, the family had never been granted a Right to Arms and therefore they weren't entitled to use a Coat of Arms. They just decided they wanted one and made one up without permission. My people, cutting around and generally ignoring the gatekeepers. I'm thinking very seriously about using that family emblem as the publishing icon for my future books.