Writing, especially fiction writing, is a fairly aberrant pastime, and most writers need a coping mechanism to deal with the unnatural levels of solitude and introspection that decent writing often requires. In short, they need something to get themselves out of their own heads for a little while.

Every writer has a different way of doing this. The really legendary ones seem to turn to drinking, to drugging, or to chasing down a mid-life crisis in the guise of a string of women half their age. Me, I'm not the stuff of legend- I like to play with toys.

Previously, I've mentioned my, uh, son's (yes, that's it) Planet of the Apes Kubricks and the Monkey King Playmobils that I've customized. Believe me, I could go on and on about cool toys I have in the house, cool toys I've had, or cool toys I want (I'm on toy probation, in general. One in, one out is the house rule) but this isn't a toy blog, it's a writing blog, and in that vein, I won't mention my wonderful double barrel soft dart shotgun (oops). Instead, I present for your enjoyment, Michael Moorcock's Elric of Melnibone (I've been reading Mervyn Peake's Titus Groan and it's given me Moorcock on the brain. Heh.) It's a Playmobil custom, done after Brom's well known painting: 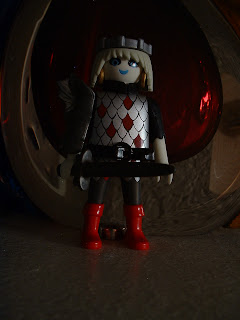 The best part is that my son can play with it, though I've decided not to teach him the part about black swords and their soul-stealing properties. Maybe when he's four.
Posted by Don Doggett at 11:59 PM 1 comment:

I write nearly every day. Sometimes I write for fifteen minutes, sometimes for an hour. Sometimes it's just on this blog. But it's important to do it, because writing is a habit that must be cultivated like any other habit. The great thing about this particular vice is that instead of smoker's lung or a bad liver, you end up with a body of work that you can be proud of, perhaps even a legacy, if you're that ambitious.
Posted by Don Doggett at 8:09 PM 1 comment:

This post falls squarely under "write it down before you forget it". My son and I met my wife (and his mother) for lunch yesterday, and as a surprise she brought along a tiny meteorite her boss had generously loaned to her for me to see. Cool. Yet another thing I've always wanted to hold in my hands. So we're sitting in the taqueria, and I'm holding this neat little hunk of space iron, and I drop it onto the concrete floor. "Ah crap!" I say, and I think to myself I hope I didn't break it. Yes, I actually thought to myself I hope I didn't break this little melted hunk of iron that has been hurtling through deep space before punching through our burning atmosphere and plummeting tens of thousands of feet to collide with the Earth. Yep.
Posted by Don Doggett at 3:31 PM 3 comments: