There's a hidden perk to self publishing, one that some authors probably don't dig, but that I find very satisfying: being paid in kind. I suppose your feelings about it depend on whether you're trying to pay your bills with your writing or not. That would be nice, but I generally consider my print run a success once I've sold enough books for it to pay for itself. Because let's face it: having to pay to be published just doesn't cut it.

But back to my point. I love trading a book that I've essentially (with the help of a printer, and a few very, very, kind and talented friends) made from the ground up for things other than cash. I've traded for other books, for self produced music discs, homemade art, delicious lunches, even knowledge (it's hard to find in good condition).

This last week brought me something different in that the trade I took for one of my books (Carnival of Vulgarities) was once cash. Seventeen centuries ago, give or take. Yep, an antique Roman coin from around the time of Constantine (I think the portrait is one of his sons, but while it's in good enough shape to be extremely cool, most of the writing is pretty worn down). It's the oldest thing I've ever held in my hands, beating the book in my earlier post by about twelve hundred years. How could I say no to a trade like that? In a very real way, experiences like this are much better than signing a deal with a publisher. Cash is fleeting, very fleeting, but it's this sort of sharing that makes the task of writing worth doing.

Do you think FSG would pay me in denarii?

I Love You Damn Dirty Apes

I've found that when it comes to Planet of the Apes and everything therein related, there are two kinds of people. I'm the kind who dressed as a gorilla soldier for Halloween (at the age of 33) and who began writing an (as yet) unfinished biography of General Ursus, aping the style of Suetonius' Twelve Caesars. Planet of the Apes has pizzazz. It's got class. It's got sexy bikini cavewoman Linda Harrison. And it's got Charlton Heston being chased by angry gorillas with guns riding horses. Gorillas on Horses! With guns! So now you'll know where I'm coming from when I tell you about my dream and its outcome. Its glorious, glorious outcome.

About two weeks ago I was watching Beneath the Planet of the Apes, which is an incredibly entertaining movie in its own right, less clever in its satire (who can top Rod Serling?) than the original but relentlessly nihilistic and darkly funny. Needless to say I enjoyed the hell out of it.

That night I had a dream that I found a set of Planet of the Apes toys that were made for little kids, like my son's Galactic Heroes Star Wars toys, or those Superhero Squad guys, Captain America, Iron Man, etc, little two inch superdeformed bits of plastic simian joy. I am a 38 year old man, with all the responsibilities and stresses that entails, and I have to say that this was the purest, most golden dream I've had in a decade. "I'll take them all!" I said in my dream, and when I woke up I could still feel the smile that must have been plastered across my face for half the night. I don't usually remember my dreams and I talk about them even less, but this one stuck and I told my wife. As I did, the same goofy smile came back. Like I said, pure.

Now, I'm sure everyone has a good idea of where this story is going, but let me just say that by the end of the day I had completely forgotten this dream. It was one of those things that was so beautiful and childlike all you can do is accept it, enjoy it, and let it go. It's the natural thing, I think.

Anyway, a week later I'm in a comic shop (imagine that) and I'm standing at the counter waiting to pay. I look down into the glass case that houses various and sundry items.

General Ursus, on a horse. Four gorilla soldiers with guns and clubs. Astronaut Brent, in primitive human duds. Two mutant humans. And a cage wagon with another horse. Two inches tall. Kubricks. I'd never heard of them. These particular ones have been out of circulation for seven or eight years.

Since then I've tracked down Dr. Zaius, Cornelius, Zira, her nephew Lucius, Julius the gorilla jailer, more gorillas, and of course, Chuck Heston himself, Taylor. I don't know if dreams come true, but I do know this: Gorillas on horses are something you never outgrow. 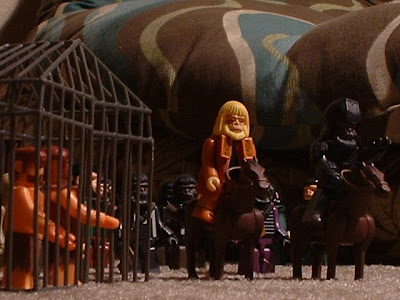