Buck Up, Little Soldier, It's a Tough Old World

There are a lot of people writing. A lot as in thousands, hundreds of thousands. In 2008, around 275,000 books were published by traditional means, and a few thousand more than that through print on demand and other venues. That's over half a million new books in one year. If you're a writer, especially one who's not traditionally published, that's sobering news. Basically, the market is glutted and there are probably not enough readers to sustain the industry as it now exists.

Is this a bad thing? Well, if you get paid to write then it might be, and if you're trying to get paid to write it almost certainly is. There are only so many seats at the table, and when there's more good writers (and I believe there are tons of good writers, contrary to the mostly self-serving, emotionally fragile, and territorial opinions I've heard recently) than there are deals to give, it all devolves into Who-Do-You-Know? And when the answer to Who-Do-You-Know? is nobody, the next logical question should be Why-Am-I-Doing-This?

It's an important question, because the odds are you're not going to make it as a writer the way you thought you were when you thought this gig was such a great idea. It's something we all have to deal with, but it can be liberating when you find the answer- your own personal answer. Because all great writing is created from a personal vision, and in the absence of money, prestige, and all the other trappings of the ever more distant and largely illusory publishing dream, your inner vision is all you have that's worth a damn anyway. Me, I wouldn't sell mine out for anything less than six figures.
Posted by Don Doggett at 1:02 AM No comments:

Hairy handsome prince
He's doused in pitch
Watch him dance and scowl!
Hear him prance and howl!
He's a wolf you see
All the critics agree
And He's made of win
And of spin spin spin
But beware the flame-
One spark and. . .
On to the next big thing
Bark, dog! 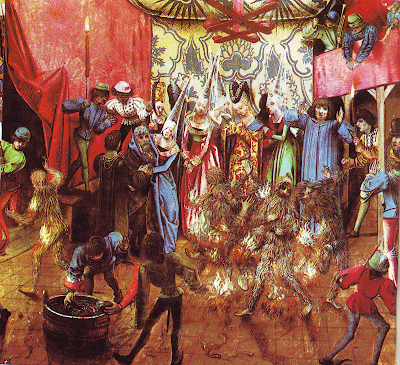 Posted by Don Doggett at 8:57 PM No comments:

It's a New World, Baby- pop a cork, pour a glass, and relax

If I'm remembered at all as a writer, it's a surety and a certainty that I'll fall firmly, if I don't fall flat on my face, within the company of a not so rare new breed: The Twenty-first Century Author. Now, I'll admit there's not yet a lot to differentiate the Twenty-first Century Author from those who have come before, either in terms of what we write, or the manner we approach things, or in terms of the ghosts we fear and the goals we hope to accomplish. But amidst all the familiar pressure, the doom and gloom, the fear of the death of the printed word, and the apparent sinking of the publishing industry into the depths of the great pixel sea, I come bearing glad tidings to those of our kind.

You see, you and I, and anyone else fortunate enough to have begun our calling beyond the year Double-oh (or Dubyo- Now wouldn't that be an ill-omened nickname!), we are free. Capital F Free.

The Best writing of the Twentieth century? Not my problem. I don't have to play that game and neither do you. We're not burdened by Hemingway, Faulkner, Steinbeck, Borges, Nabokov, Angela Carter, Tolkien, Dashiell Hammett, John Gardner, Raymond Carver, Kafka, Fitzgerald, Dorothy Parker, Kerouac, W.S. Burroughs, Mervyn Peake, Flannery O'connor, Robert Graves, Marguerite Yourcenar, Virginia Woolf, Philip K. Dick, and so on, and so on, a hundred years worth. They've claimed their century, written all over it, marvelously and convincingly, but this one is ours. It's really a pretty sweet gig when you think about it like that.

But I'm not finished. It gets oh so much better. Not only is this a new century, if I needs must tell you, it's also a new millennium. Do you get where I'm coming from, you lucky, lucky writer you? Bye bye Dickens, Poe, Hawthorne, Conrad, Melville, Thomas Malory, Mark Twain, Chaucer, Cervantes, Dostoevsky, Tolstoy, Shelley, Bram Stoker, Voltaire, Dumas, Hugo, Robert Louis Stevenson, Swift, Kipling, Christopher Marlowe, etc. And a special goodbye to that greatest of all burdens on the modern writer's psyche: good William Shakespeare himself. I swear on my OED, it's enough to make a person weak in the knees.

But don't get me wrong, don't misunderstand what I'm saying, especially those of you who are unlucky in-betweeners. This isn't a dismissal of the past, not at all. We all live off those who came before us, and we build our mansions on their foundations. And they did the same, thank you Homer. This way of thinking is just a reorientation of the mind, an acknowledgment of the present and the future as a blank slate waiting to be filled. By you, by me, and by the new Best of the Millennium. It's a blessing and it's a challenge. And it's all ours. Better go have that drink now.
Posted by Don Doggett at 10:25 PM 1 comment:

The Tragedy of Mowgli 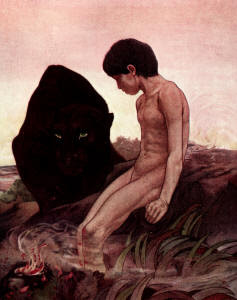 I love Rudyard Kipling's The Jungle Book, and The Second Jungle Book as well, and though they both contain several fine independent tales (Rikki Tikki Tavi, The Undertakers, and The Miracle of Purun Bhagat come to mind) it's the Mowgli stories that justifiably make these two volumes famous. They're dangerous, magical, mythic, and beautifully written, and as a hero Mowgli puts Tarzan to shame (in more ways than one- Burrough's derivative work is disturbingly racist in parts).

There is also a current of death, loss, and conflicted loyalty that runs through them like a dark jungle river, a current I barely noticed as a child and, judging from Kipling's consummate skill as a writer, most likely wasn't meant to. As an adult, however, I found this hidden layer of nuance to be a thrilling find, a validation of the substance in my nostalgic revisiting of a childhood memory.

Then I read In the Rukh. This is a Mowgli story told through the eyes of a British Forestry Service officer, set in the years after Mowgli left the jungle. It is not part of the Jungle Books and indeed, it is nothing like the other stories. It is naturalistic, adult in its themes, and completely lacking the wonder of Mowgli's childhood adventures. It's damn depressing, and in fact, I would go so far as to say it very nearly undermines the stories that precede it. In the Rukh is, in this respect, postmodern, or it would be, if not for one thing: It was written first, before The Jungle Book.

So, Kipling's obviously not an early postmodernist. Nevertheless, he chose to include In the Rukh within All the Mowgli Stories and he never felt any need to rework it to make it fit more comfortably, which makes me suspect that he might not have been entirely displeased with the dissonance between it and its brothers. I certainly found it a rewarding kick in the teeth.

I'm not sure The Jungle Book and its sequel are in fashion anymore, aside from the insipid (yet undeniably catchy) Disney version of the stories, but I hope that the popularity of Neil Gaiman's The Graveyard Book (which was heavily influenced by Kipling's work) will spur a greater interest in these classics. I would encourage anyone, young or old, to seek them out, and afterward, to read the last, which is actually the first, Mowgli story.

Notes on In the Rukh
Posted by Don Doggett at 10:11 AM No comments:

I think I've said this before, but I love Playmobil. They're small, but not too small, sturdy, but easy to customize, and not so detailed that you can't use your imagination. Most important, my son loves them too, making them a way that I can share with him my love of fiction and history without sucking the fun out of his curious little brain. Kids are kids after all, and while everything is a learning experience, not everything has to be a lesson. So, with that in mind, I give you- 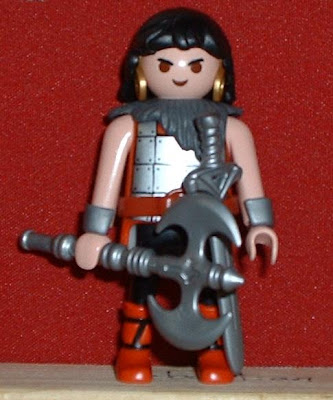 He's more or less after this image though honestly I customized him before I'd ever seen it. Robert E. Howard, Conan's creator, is one of those special writers, like Edgar Rice Burroughs, and H.P. Lovecraft, whose legacy is not one of sustained technical skill (though The Frost Giant's Daughter is as good as any short story I've read) but rather of inspiring several generations of talented artists, filmmakers, and writers to build upon and pay homage to the mythos they created. In this way he is probably as important as any twentieth century writer, and may well be longer lasting in the public consciousness. Only time will tell, but this much is certainly true; Conan makes a heck of an addition to a three year old's (and his dad's) toybox.
Posted by Don Doggett at 9:45 AM No comments: