It's Possible I May Have Carried It Too Far 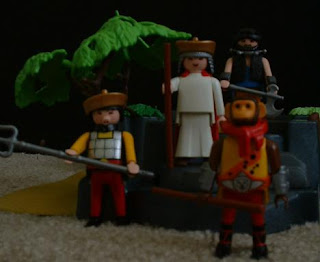 I've been in a creative dry spell lately with my writing. A drought, really. Family matters sent me back east around a month ago and I still haven't gotten back on track. As soon as I returned, my son, who is two and a half, hit his terrible twos/terrible threes in full stride, and everything in the house that was made of concentration was instantly shattered.

I tend to take these things in stride. I'm not writing for a living, so it's no big deal to take a week or two off. In fact, I tend to return to my work with fresh eyes and renewed energy. On this particular break from writing I've spent a lot of time thinking about my current project and the tone I want from it. I've been reading a little, but mostly I've been spending time with my son, and I've become fascinated with his Playmobil toys. More specifically, I've been modifying them.

It started innocently enough, first with switching hair and beards to turn a set of Vikings into Gauls to fight against my son's Romans (Yes, Romans. Did I mention Playmobils are the most bitchin' toys ever?). Next I made the emperor Hadrian and a German bodyguard to accompany him, then an auxiliary cavalryman, a Hun, and a Celtic warrior queen, now defunct. It was hella fun, maybe too fun, because two weeks went by, then three, then four, and I wrote all of seven sentences.

It was Monkey who woke me up, Monkey, Pigsy, Sandy, and Tripitaka. Yep, I created all four of the main characters from The Journey to the West as Playmobil figures (Did I mention these are my son's toys?). Even as I exulted in how incredibly cool they are, a metaphorical rain fell on the inside of my head, and I realized I was channeling massive amounts of creativity into these toys. I mean, it's no simple thing to make the Monkey King and his entourage out of three inch plastic men. I did it though. Yay me. The drought is over, now it's time to write.
Posted by Don Doggett at 10:42 PM No comments: